Greetings to you Blood Bowl Fans,

Live from HDWSBBL headquarters I Viktor Nekromortis am previewing the match of the season so far pitting the two rookie teams aiming not only to be “Best Rookie” but also Superbowl Champions.  LET’S GET READY TO RUUUUUMMMMBLE! as we look at  Ashut Titans VS Arkhan Black Towers.

Chaos Dwarves are meant to cage up roll down field and score TDs through a well protected hobgoblin whilst kicking as many people of the field as they possibly can and by Nuffle have the Titans done that! 4 wins, 1 loss (from their first match against the Paladins) 27 casualties! and 9 TDs.  Not a bad return at all.  Some people will look at their record though and say a lot of the matches have been against teams who have not performed well against the Titans but you can’t get away from their casualty stats.  They’d give any one second thoughts of standing toe to toe with them.   A SPIKE! rating of 163 they are a team on the up and will be a challenge for any team in the HDWSBBL.

The latest Undead team to grace the HDWSBBL following in the fine pedigree of Grimwood Voodoo and the Superbowl winning Atrocity Exhibition.  Undead are the ultimate hybrid team.  You can hit, you can run, you can pass they have it all with the team built around two huge mummies.  The Black Towers have been no different with power, pace and sheer punishment winning an impressive 83% of games for them from arguably the harder of the two OWC conferences.  However, with the Carcassonne Province Paladins scoring an impressive quick TD and the loss Mordheim Comets it may be said that the Towers are struggling to shuffle and keep up with the quicker teams.  Also it has shown that they are taking some serious injuries – So are they ready to compete with a team who are tougher and have caused the most casualties in the league?  Boasting the rookie SPIKE! rating of 175 you can guarantee they will give it a good attempt.

Well this couldn’t be closer if you tried.  The players are very well matched in performance with multiple players having a lot of talent and skill on the pitch.  You can’t look further on the Titans team than the blood soaked Lhakhi Harsh-Foot he has picked up a couple of MVPs for doing nothing in early matches but is now living up to his billing with that claw and hard hitting ability.  Keeping close to this player spells death for many many players.  He is a lynch pin in the team and a target for the opposition.  On the Towers team they have a better spread of stars.  Prince Ehtar leads the line for pain but behind him he has 3 ghouls who have all stepped up to the mark, Gutwrencher and Corpsegrinder both have scored 5 TDs not forgetting Vilestorus who has 3TDs himself. In short the teams are very evenly matched.

Offence is where this match will be won or lost.  I hear you all now “don’t be stupid Doc of course it is!” but I mean the teams drive and how offensive each team can be to get the ball where they want it at any one time.  I’d say whoever wins the toss will receive and try and get the first punch!  Undead offence will look a little like the picture below.  They will immediately want to cover the ball with the ghouls (1) and then want Lhakhi Harsh-Foot away from their players early so expect a Mummy to hit him hard first off (2)!  With the ball in hand then expect them to cage and roll up the field (3). 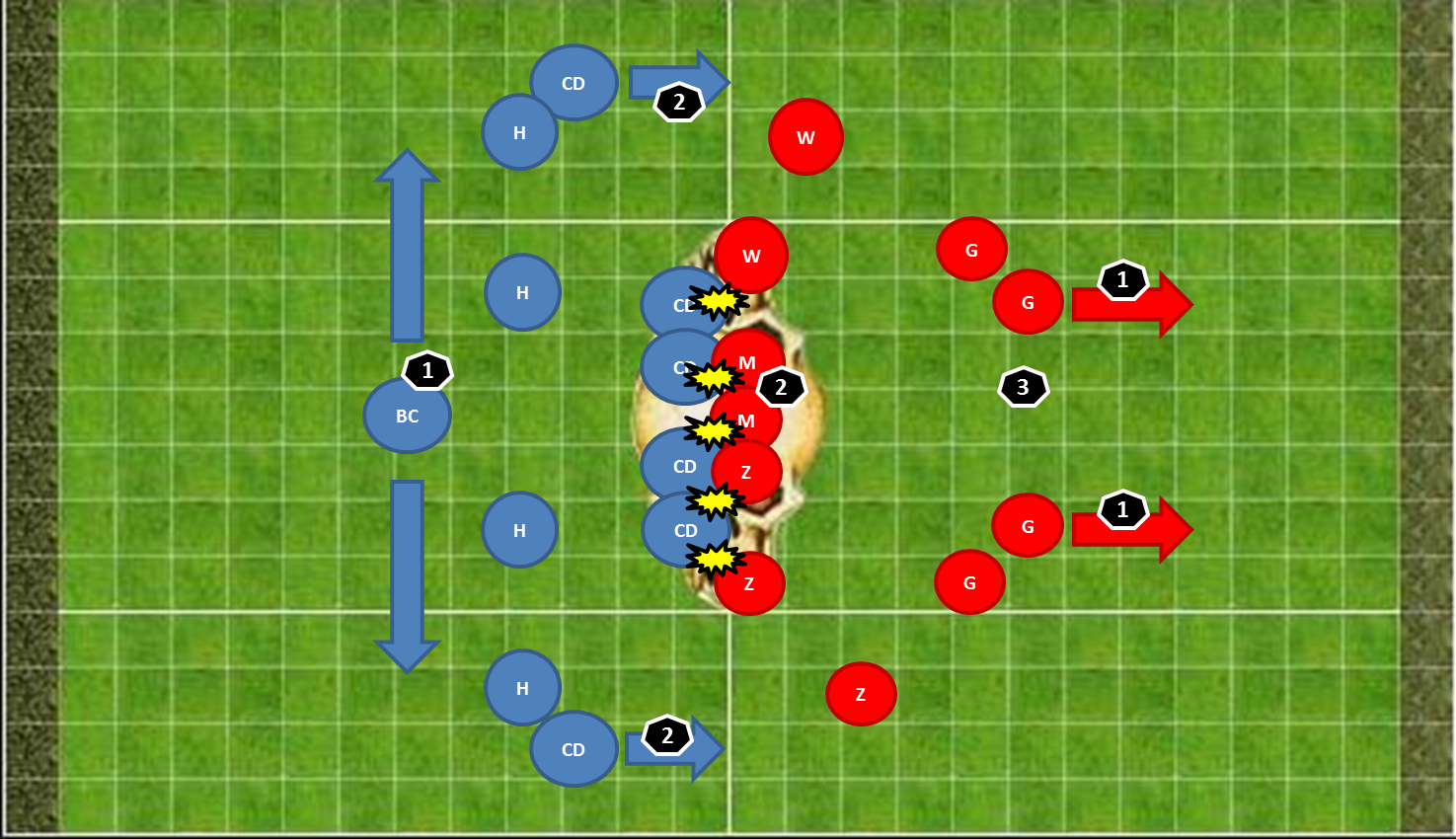 Defensively the Titans will look to contain the Towers advance using the one remaining Bull centaur to patrol the backfield (1) whilst the Dwarves not on the line force movement of the Towers toward the centre of the pitch.

Offensively the Titans will aim for pain!  They excel at it so why not dish it out.  As you can see below the zombies will take the initial brunt (2) but closely followed by the Mummies (3) but not until the hobgoblins cover the ball (1).  Then expect the Bull centaur to cover the Hobgoblins as they run up the pitch in a rolling cage. 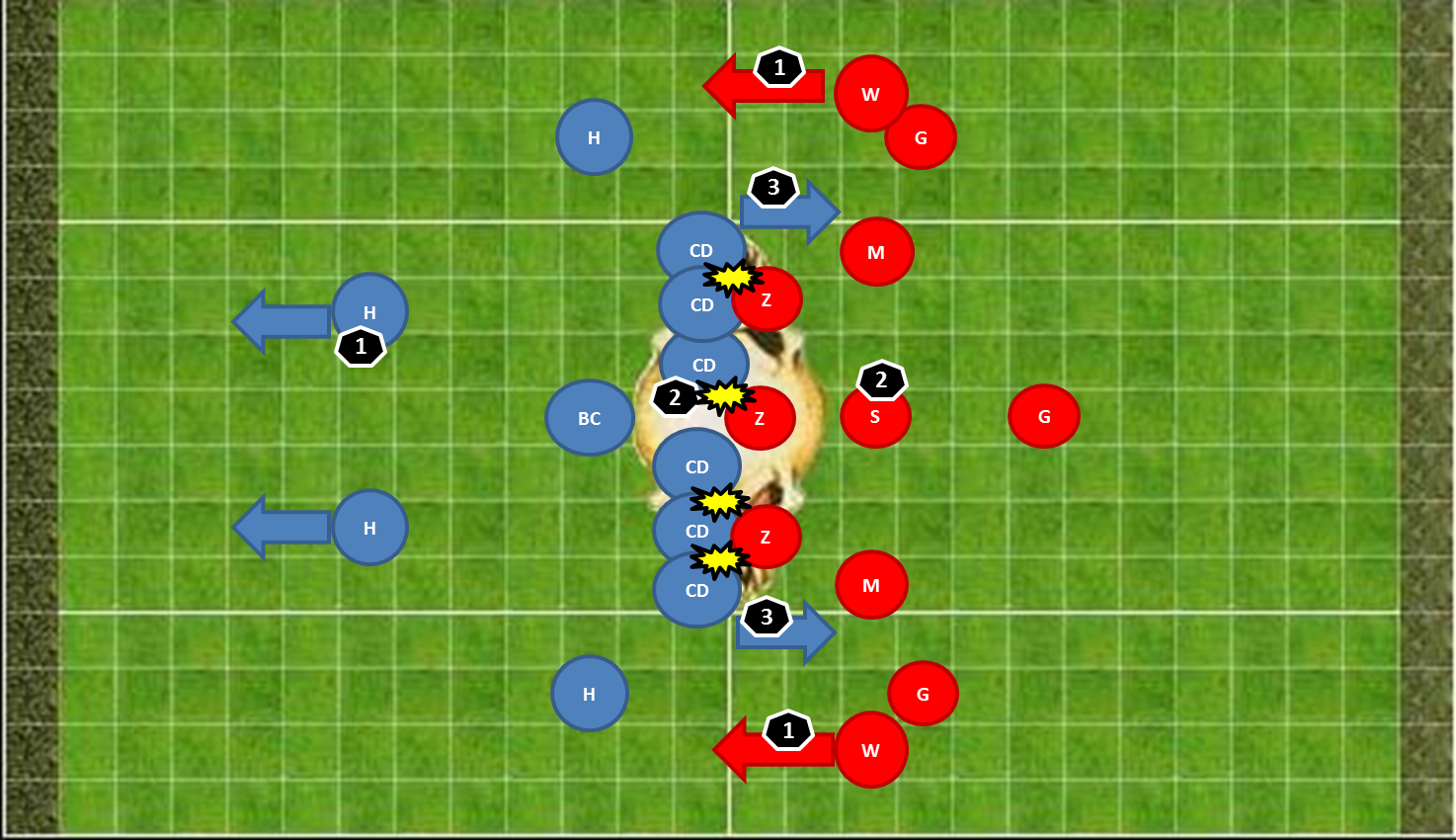 In defence it is all about being flexible for the Undead.  Try and disrupt the cage by running towards the ball before the Hobgoblins can get it  (1) is on and probably a good idea.  However, holding back and moving the Chaos dwarves to one flank could be another way to go.  The Skeleton may also have a pivotal role as well as the extra movement will make him a nuisance all over the pitch as he tries to emulate the great Billy Bones.

This will be close.  It could be 1-1, 0-0 or 2-1 one way or another.  I can’t split the teams so I will say 1-1.  One thing I can guarantee… there will be blood and those who get the first punch in hard will probably get the better of their opponents.  Let the battle begin!