This weeks preview is looking at the Sly Sports Challenge Cup Semi-Finals.  Nothing is more exciting than the business end of any tournament and the Challenge Cup has been no different.  This season  all the participants have shown the power of one particular conference with the NWC giving all the participant as we preview Mordheim Comets VS Arkhan Black Towers and Slaaneshi Big Society VS Oxmoor Savages.

The HDWSBBL has been blessed throughout the seasons with famous Skaven players such as Arcani Spark and pretty good Skaven teams but none of them has performed as well as the Comets.  Using varied tactics and brave actions they have been one of the bang-or-bust teams of the season beating the Arkhan Black Towers once already and the Temper Bay Marauders but losing to the Slaaneshi Big Society and Monster Mashers.  Fast and bold with a Spike! Magazine Rating of 125 these rats will give anyone a game.

What can you say about the Towers this year?  They have been strong causing numerous casualties, fast scoring many TDs and have been pretty mean in defence.  Playing to their strengths this team are looking to pick up silverware this season and showed their potential by holding the Ashut Titans recently 1-1.  They haven’t had it all their own way this season though with close games against the more agile teams including the Comets.  Will they have enough this time around to beat the rats and take the step closer to the trophy? A Spike! Magazine Rating of 180 makes this undead monster is favourite for their match.

The second season for the Society and this one has already been controversial after there bad spirited game against the Ashut Titans in the last round.  A rogue official sent the game to penalty kicks and not to further extra time as the Society went through.  Stepping out from behind the other Chaos teams from the HDWSBBL their fortunes have also been mixed by losing to Fairy Wizards Guild, Towers and Savages but beating the Comets, The Brewers and the Monster Mashers before the Titans.  This is a team with many facets to their game but this makes them unpredictable.  Win or lose they can pull something out of the bag as their Spike! Magazine Ranking of 221 shows but will they win this one?

No other team has had a season such as the Savages have.  Every time they look to be getting a head of steam up the wheels fall off – well that’s what they’d have you think anyway.  It all started so well with 3 back to back wins against FWG, Carcassonne Province Paladins, and Black Mountain Bloodjaws.  Then came the Titans game when Chaos Dwarf claw met flimsy armour and ever since the Savages haven’t had a full team available to them.  However, it’s not all doom and gloom.  After a loss to the Mashers they have got back on the horse with wins vs the veteran Blackburners and Big Society.  So how far are they back? Quite far with the lowest  Spike! Magazine Ranking in the HDWSBBL of 112 but the coach seems to have a few tricks to even the score.

Well what can you say about the gulf in players here?  The Towers look to have the players to do the job in most departments in most games.  2 hulking mummies, 3 very skilled ghouls, 2 wights and even a zombie who knows how to block properly.  However, the skaven have two words that puts fear into every coaches heart – Gutter-Runner.   Four of these rampaging rats in any team can get you out of a hole and have no doubt here is where the threat is for the Skaven.  They will be vital for the Comets and could be the fulcrum that the match rests on.

Two chaos teams at two very different points of their development.  The Society have a player for nearly every occasion with a mino who loves to hit, a chaos warrior who backs him up and then a beastman who knows how to get the ball down field quick.  On the other hand skill and ball craft are not the top of the list for the Savages.  However, in Pennington they have a super-strong and super-quick beastman who will be difficult to stop if he gets the ball.  It’d be a good idea to try and get rid of him quickly if you were the Society coach.

As we are looking at two matches this week I have diverted away from our normal tactical analysis of attack and defence for each match but will focus on the tactic which will make or break the tie. 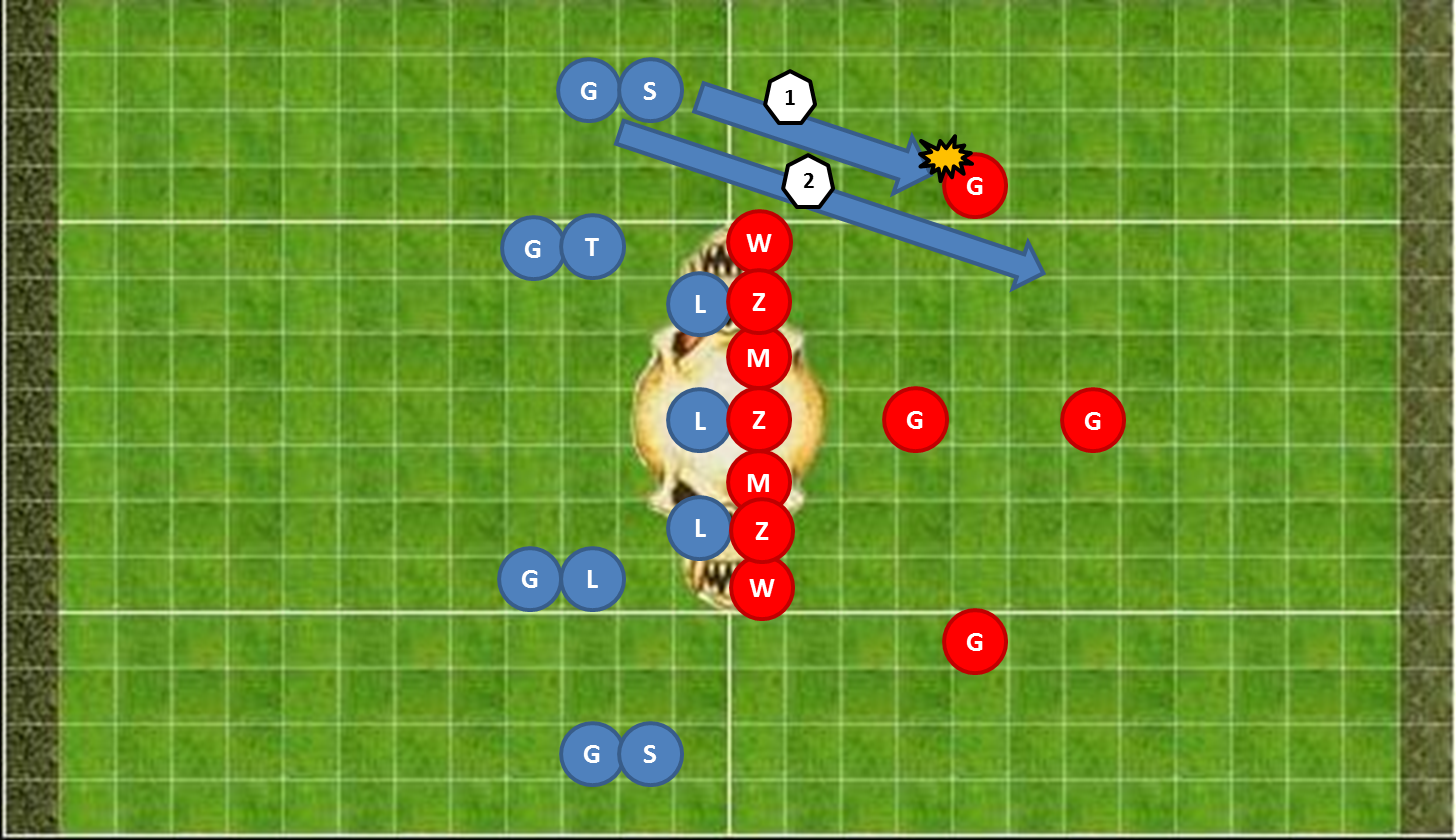 “The Rush” could be the move that gives the advantage of the game to the Comets.  During any Towers offence the failure of the defence to cover the flanks properly could see a quick blitz from the stormvermin (1) with a possible assist from the linerat to then open the ball up to the Gutterrunner (2).  With the ball in clawed hands the Towers would have to quickly revert to defence if they were to stop the turn-around score.  However, if the Towers offence was not stopped the front line could decimate the skaven line of scrimmage and get a cage rolling on the half way line.

The Big Society “Spray and Pray” has made an appearance a couple of times this season getting the veteran chaos known for their quirky tactics.  The question is will they try it from the kick?  If so they will need the warriors on the line to clear Fluffy as he goes to blitz the defenders on the wings (1) before two beastmen run down the wings giving some protection for one of them to be the receiver (2) and (3).  Then Izzies Ed’ard will pick the ball up and get ready to pass (4).  However, if the coach plays this right the Savages will not be able to commit too many men to defend this just in case the Society do the old Switch-a-roo and pass or run the other direction.  This tactic is powerful but risky.  Will the coaches know how to deal with it?  Or could it be either teams downfall?

Well in the Comets vs Towers I think there won’t be a repeat of the heroics which won the Comets a wonderful victory earlier in the season as the Towers win 2-1/3-1.  BUT let’s not count our squigs before they are hatched,  if the Comet’s inducements and Gutterrunners are on form anything could happen.  Keep an eye on this one but the safe gold is on the Towers for the final.  The Society vs Savages match is a bit closer.  Savages will have plenty of league gold to put to use when facing the Society and I’d expect a wizard or star or both to come along which could change the game.  I think this will be close with a 2-1 victory to the Savages mirroring the league result and sending the Savages to the Final.