A final is a precious thing in Blood Bowl.  The glimmering trophy, the rampaging fans, the glory of kicking the teeth out of your opponents skull… hmmm wonderful.  Now it has all come down to these two matches for the 4 teams involved.  Who will be victorious in their quest to lift the trophy?  This week we preview the Sly Sports Challenge Cup final between the Arkhan Black Towers and the Oxmoor Savages and the Sly Sports Vase final between the new orcs on the block Black Mountain Bloodjaws and the veteran Valhallen Vixen’s.

Well the Towers have done very well this season.  Sewing up their division with a match to spare and reaching the Sly Sports Cup final.  20 TDs scored and 25 casualties caused means they are looking good and have time to concentrate on this prestigious final cup match.  They certainly look like a team with potential especially when you consider they have beaten their final opponents 2-1 in the World Series.  This did not come at a cost though as the Savages lived up to their name killing 3 players on the way.    Will they have enough this time around to beat the Chaos horde again and lift the trophy? A Spike! Magazine Rating of 195 puts them in pole position for the final.

Well it just goes to show the down right spirit in this team and in the coach that the Savages have made the final.   Their woes have been well documented but they are back and performing wonders on the field including 3 Tower players last match and throwing a horrendously difficult long pass for a TD in their last World series match.  They have qualified for the playoffs and would have been challenging for the top spot if they hadn’t had those two losses in the middle of the season.   Not to be underestimated with “The Ox” at the helm their Spike! Magazine Ranking of 166 shows these boys can play.  Bring on the Final!

Now not much was thought about these new Orcs in the beginning of the season.  A win, a loss and a draw in the 1st 3 matches followed by 2 more draws made them seem very ordinary.  However, this seems to have been a false sense of security with a subsequent winning streak of 4 matches in all competitions these boyz are taking the Vase by storm and giving Temper Bay Marauders a run for their money in the World Series (where they are unbeaten).  A Spike! Magazine Ranking of 192 means these Orcs are looking for Silverware!

These girls and guys from the frozen north are certainly the old veterans of the league this year.  Led off pitch by the less than experienced “The Janitor” from the TNN and on it by Erika they have started to get a little head of steam up and the Vase final place is not as much as a surprise as we should all think with 3 wins and a draw from their last 5 games.  Keep an eye on star runner Viktor as we all know he is the real source of power in this team.  A Spike! rating of a massive 306 could show what the old guys are all about!

There is a gulf in playing ability here.  The Towers have multiple top scorers, players who cause casualties and a super-strong zombie.  The Savages have Kent and Pennington who drive this team forward.  The warriors are strong and now know how to block but in comparison the Savages are down in strength here.  How will they overcome the differences?  Coaching and induced star players, weapons and dirty tricks.  All could have a massive impact on the game as the chainsaw did in the league match.  Don’t forget anything can happen on the pitch and one or two things could change the game entirely.

It is simple to compare the two teams players.  There are a set of good rookie orcs against a massive set of veterans culminating in Viktor, Kirkus and Erika.  Stop the big three from the Vixens and I think that the orcs will do remarkably well.  Inga and Enrica are good understudies on the pitch but will “The Janitor” look to use them in place of his three stars?  I am not sure.  We also know that the Bloodjaws coach likes to hit, 5 Casualties on one blitzer in half a season shows how much pain he likes to deliver.  The orcs look to be the heavier hitters and this could sway the match but will the skills of the Vixens star be enough to get around this?

Two matches again in this preview so lets look at the underdog tactics this time which could have game changing consequences. 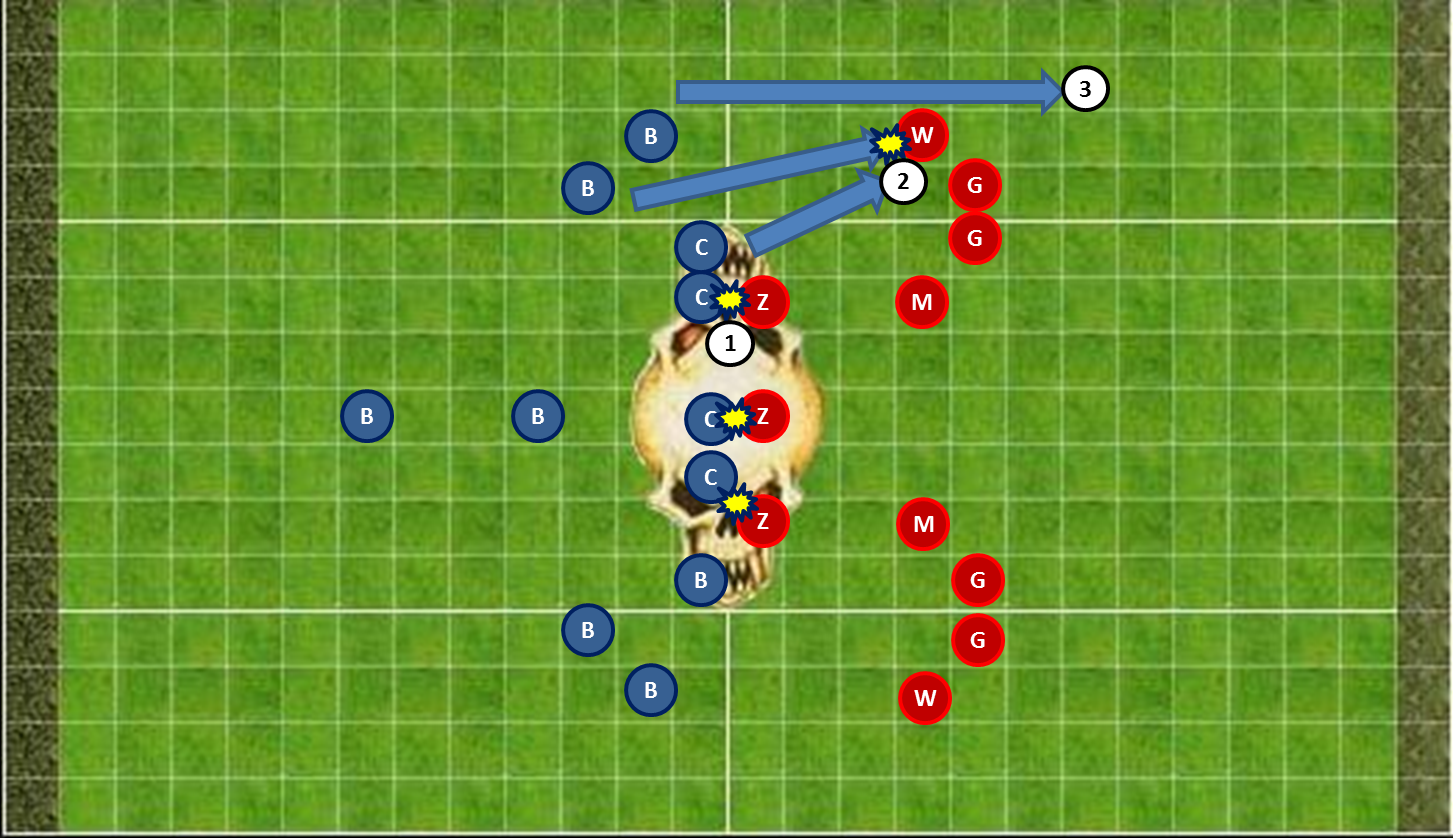 “The Chuck!” was a move that the Savages used in the last league match to perfect results as in two turns the Chaos had the ball in the endzone with the undead looking around going “Whaaaat?”.  The Warriors on the line do some initial damage before one of them walking up and taking position on the wights (1).  The beastmen then blitz shifting the wight out the way and creating space for the receiver (2).  Now ready to pass on the next turn the ball carrier grabs the ball and chucks it to the open receiver who runs for the endzone (3).  Powerful? Yep.  Quick? Yep.  Dangerous? certainly! It works and they get a TD from nowhere.  Fail and they are giving the ball back to the undead.  Cross your fingers as this could change games. 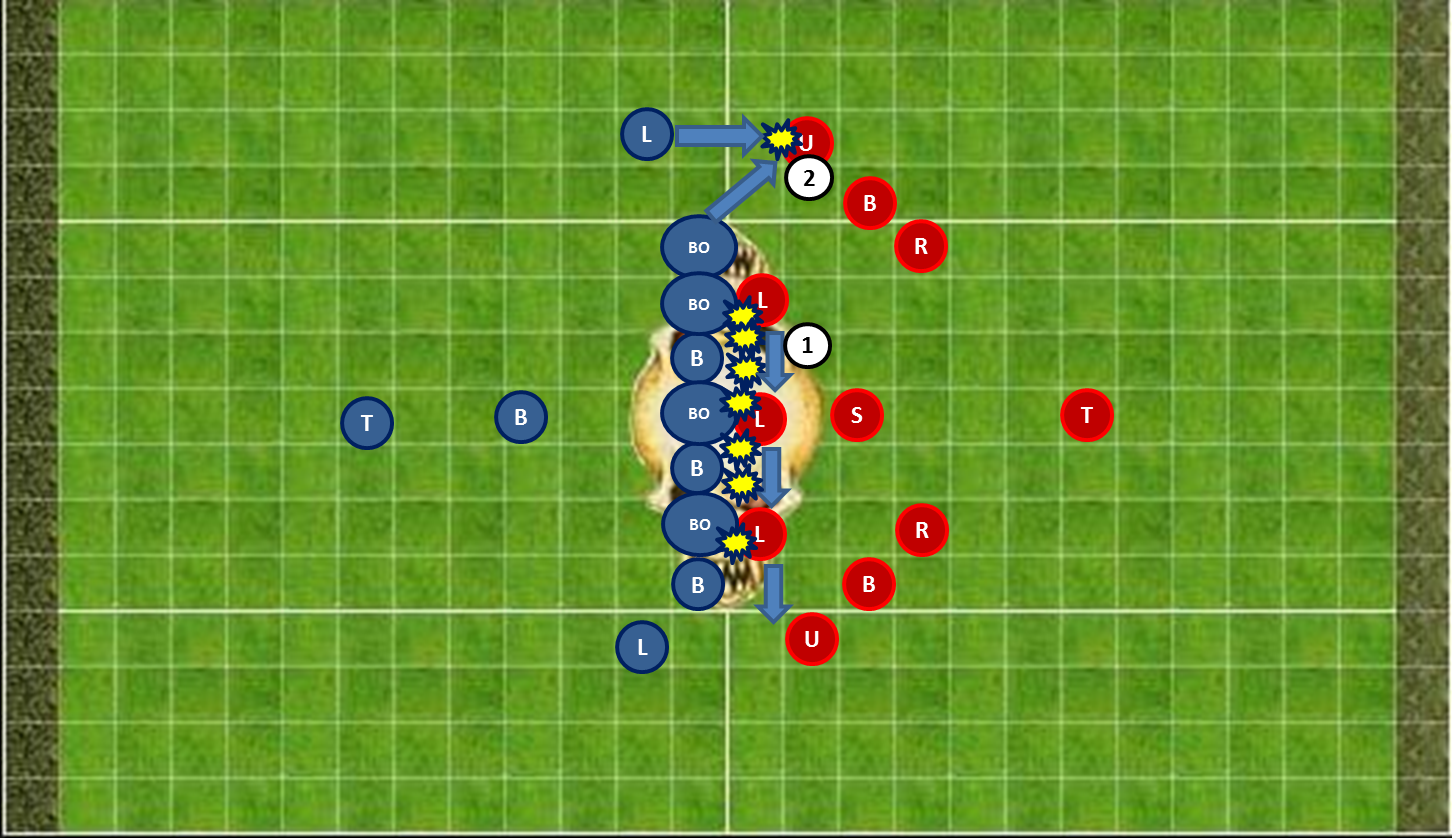 “DA KRUNCH!” is a speciality of the Bloodjaws coach and in this match against smaller armour he will relish in getting his players to have as many hits as possible.  This line up shows that with all that huge muscle of the Black orcs and the skilled blitzers the Bloodjaws will push the hapless Vixen down the line until they get hurt.  Once one is down the rest will follow as they push the players to one side of the line of scrimmage (1).  Now with little resistance the remaining Black Orc will blitz a Ulfwerner to try and get an early strength advantage over the remainder of the team (2).  Once this is accomplished and the Vixens numbers are dwindling it will be easy to grab the ball and form “Da Cage” as they roll down pitch destroying as many opponents as possible.   The only downfall for them here is will the commitment to pure power leave them too weak at the back to stop an early blitz or pressure on the thrower?  A chance for a brave Vixen I think to earn some glory!

Savages vs Towers for the Sly Sports Cup and I think this match will be close but is going towards the Towers.  The power, speed and versatility of the players will overcome the chaos horde to lift the Cup with a 2-1 score mirroring the World Series match.  It’ll be a good match with plenty of entertainment but expect the gold in Undead hands at the end of the night.

In the Vase it will be very close.  It is a simple case of can the orcs do enough damage OR will the Vixens be brave enough to throw players at the ball before it reaches the safety and security of the cage?  It will be a great game and the coaches will have to think how to get the best out of their players and prevent the game plan of their opposite number.  However, I am not sure which will happen first.  I think both teams will score but the longer it takes the Vixens to score the worse it is for them as the bodies mount up!  I will take a punt and say Viktor and the gang get it done by the skin of their teeth 2-1 with a pass and dash winning the game and the vase for the veteran Vixens.