Good Evening Blood Bowl fans from all over the Old World.

This is the first round of the playoffs with the match of the week coming from the NWC as the Carcassonne Province Paladins take on the reanimated Monster Mashers with the winner going to face the Northern Division champions the Ashut Titans.

Humans.  Well, as a rule they can do about anything in the game of Blood Bowl.  They can run.  They can hit.  They can pass. They can tackle.  But in truth they do none of these things spectacularly well as there is always an elf out there who will pass better, a dwarf that thumps harder… you get the picture.  However, in the case of the Paladins Head Coach Jancleod Van Dame has them doing most of these things adequately enough to win the occasional game.   However, they have excelled a little based mainly around the passing game.  The Paladins and quarterback Émile De’Manning have notched up 18 completions this season already and spread the touchdowns around no less than 9 players.  This hasn’t always worked though as the Paladins only won 4 matches this season.  A Spike! Magazine rating of 170 asks if they can do enough “Spray and Pray” to win this game or will they fumble this opportunity?

Necromantic teams have always been close to this reporters heart.  The first team I ever coached and my first love in Blood Bowl.  This rookie team though has had a rough time of it.  5 loses in 9 games hasn’t shown the full potential of this team at all even with a full complement of dead and decaying players including ghouls, golums, wights and the wonderful werewolves.  Necromantic teams are mainly based around running the ball and a good coach will make use of the speed and strength of the wolves to get the team moving but the wolves in this team have been a bit quiet for my liking and a bit less of their bark being worse than their bite should turn this team around.  With a Spike! Magazine rating of 161 Head Coach Bella LaGhosty better get this sorted out or they could have a Hoooowller!

Well there is a bit of a gap here or is there?  The Paladins have done more things to build on their mediocre skills but the Mashers are already better equipped to do what they do best on the field.  Looking at the base value of the teams in which the Mashers lead by 10,000 GP there is incredibly little between these two and this could be closer than you think.  So what’s going to tip the scales?  Well I think it will be the coach who does what the team does best to it’s fullest potential.   I know what you’re thinking – “That’s obvious you blood sucking, undead loving, stupidly dressed buffoon” but in this case it couldn’t be more accurate.  Both teams are versatile enough to play quick or to beat on the opponent and it will depend who can impose their style of play first.  A fast match and watch Émile De’Manning give scoring passes all game long.  Opt for pain and Hermon with Doggy could be playing catch with lots of human bones.

Sometimes matches are won on the slightest of things.  In this match it could be as small as a coin toss.  The choice between offense or defense in the first half could be critical and this is all down to the similarities in the teams.  Let’s begin by looking over the Paladins offense.  Simply put this team loves to flood the backfield and wait for the pass.  The way the do this is by creating space and forcing the opponent to try and defend 4 or 5 different receivers at once.   First the blitzers on the line frees up the linemen with blocks on the zombie (1) allowing the one of the linemen now to assist the blitz on the near side (2).  With the space now on the sidelines and one of them protected the catchers with some cover move downfield (3) before the last hit is taken on the line to move the final zombie (4).  With the line now moved out of the way the last catcher can move into place before the thrower picks up the ball and chooses when to throw.  Here the Necromantic team can only blitz one player with the werewolf (W) with an assist whilst using the wights (w), Golums (G) and ghouls (g) to try and prevent the catch. 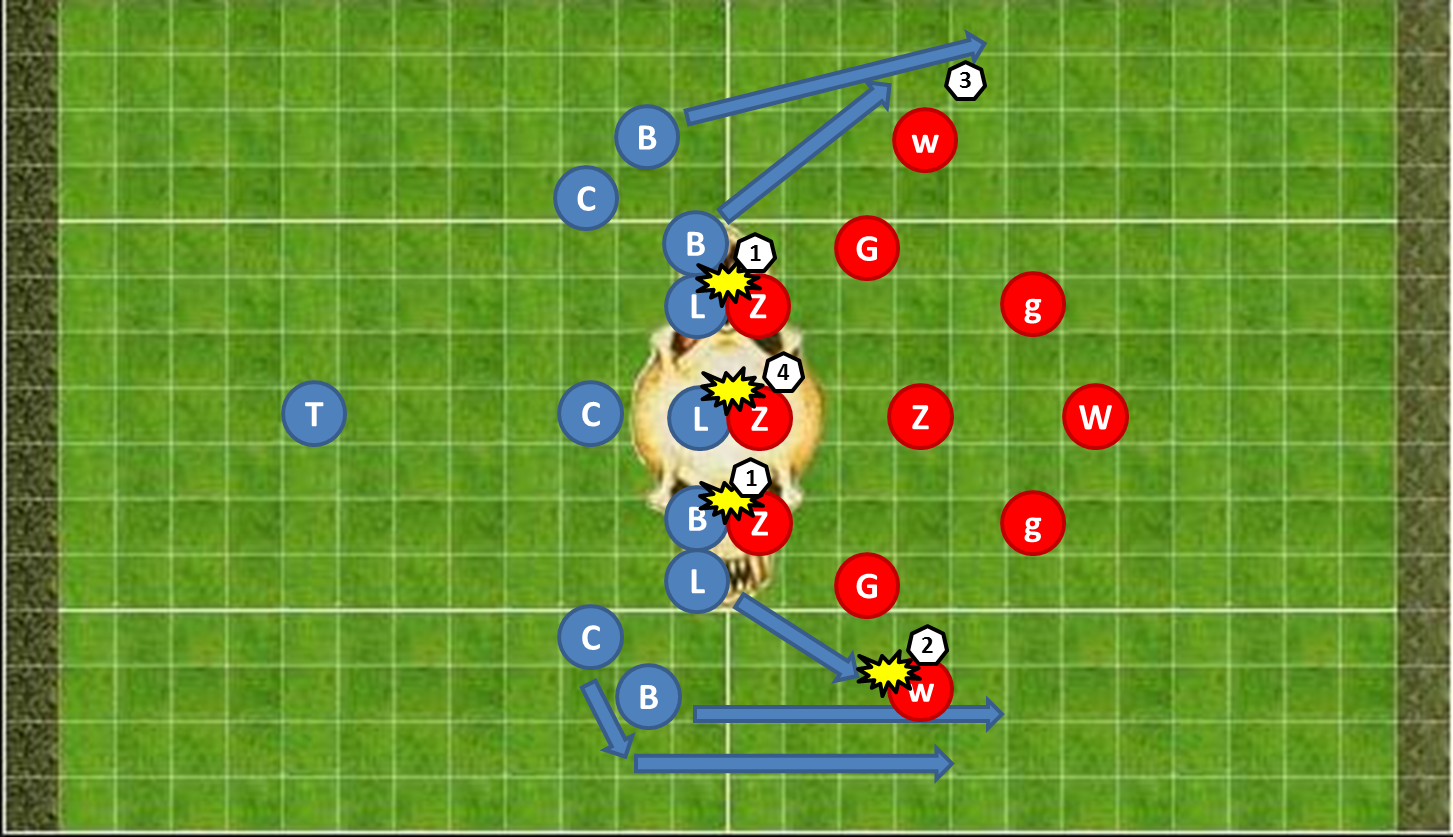 The Mashers though have to play a running offense.  They can’t pass as well as the humans and to be honest they don’t want to.  This drive is all about pain and control.  Both teams are as quick over the field as each other so the Mashers must remember what I said earlier about Humans “they do none of these things spectacularly well”.  This is what the Mashers have to exploit and use what they have more of which is POWER!  Wights on the line with Golum assists can give multiple heavy blocks to the human linemen (1).  Zombies can then tie up the blitzers forcing “only human” dodging away if they want to be useful (2).  Follow this with the ghouls ball handling and the Werewolf hunting down those low armoured catchers (3) and the Mashers could be onto something special. 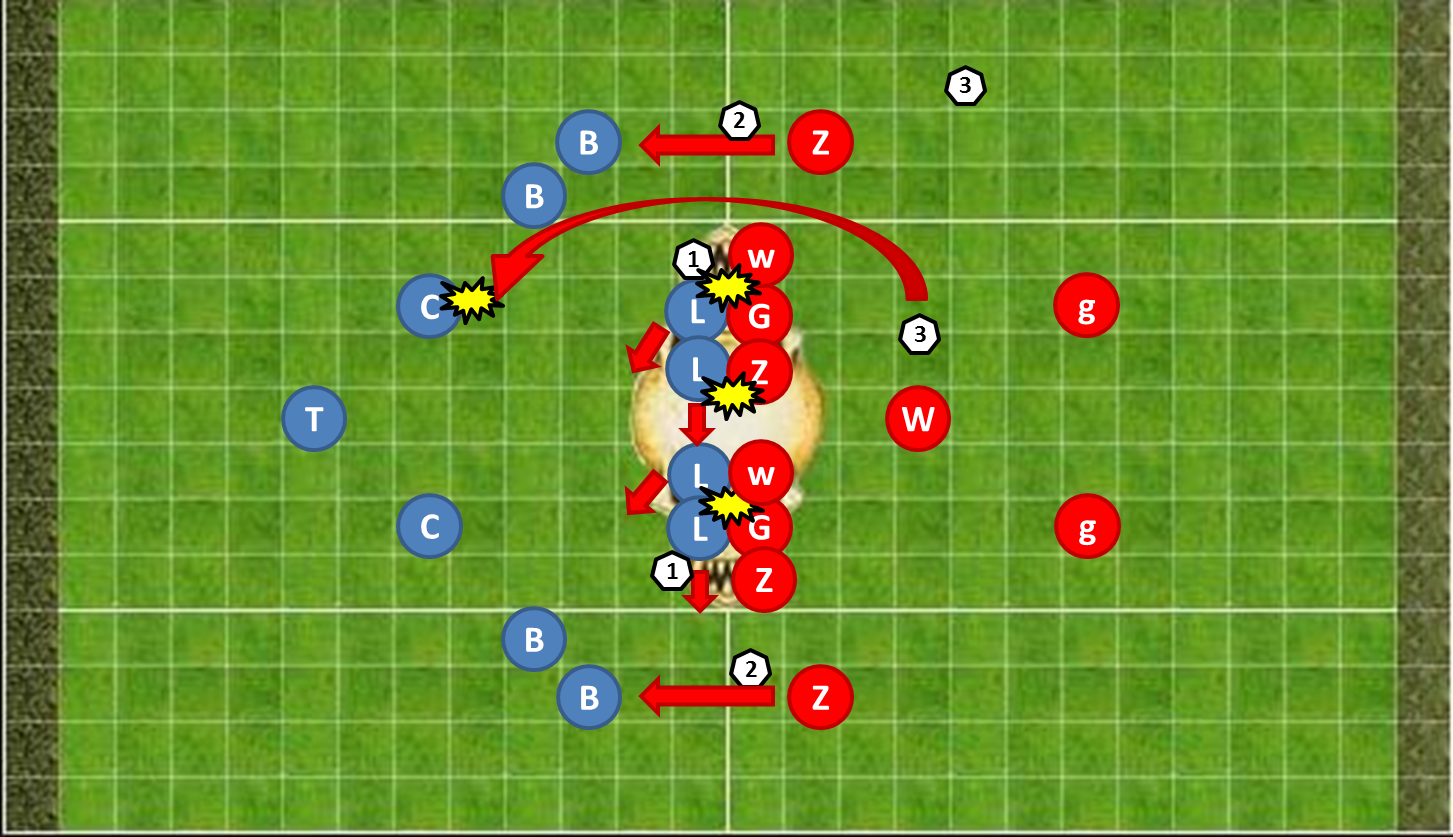 In defense for the Paladins it will all about keeping flexible and out of reach from the Mashers clawed hands.  Get too close and they could pay the price.  You will see defensive blitzes taking away markers and the occasional dodge as they try to reposition themselves in an attempt to reduce the affect the lone wolf will have on the match.

This will not be easy for either team or their coaches.  With each teams natural speed negated by their opponents it will come down to who can impose their style of game play with the most vigor.  Paladins need to make this a score-a-thon.  Pass and score, Pass and score with turning over the play if possible.  Mashers must keep this ball in hand and make the humans pay the piper in blood with each step they take.  Getting players on the floor and in the dugout will make their drives easier and reduce the Paladins offensive potential.  So who will win?  I am going with Paladins 3-1.  The coaches tactics of racking up the score and trying to reduce the injuries could be too much for the Necromatic Monster Mashers.  Saying that a stunned player, KO or casualty in the right place could leave the Mashers with the advantage and dancing into the night.  This match will be good and shouldn’t be missed!