We are anxiously waiting the Conference playoff finals and none more so than the Darkfleet Assasins VS Black Mountain Bloodjaws OWC final.  These two rookies have met twice before this season but will this match be a repeat of previous games or will the Assasins be able to get on the scoresheet and record a win after the dust settles?  This match should bring fireworks and possibly the occasional fireball to the HDWSBBL World Stadium.

The HDWSBBL knows a few things about Dark Elf teams with the Korand Kar Corsairs and the Brimstone Flayers both being multiple champions.  They are adaptable, reasonably tough and have a wonderful selection of players which can change the way a game unfolds.  What is different from those teams to this one?  These elves are extra tough in the block.  They know how to Guard each others back and this with the natural movement of elves this could make them exceptionally good at moving the opposition out of their way before giving a killer pass or handoff. The bad news is that they have only won 1 match in the last 5 which was the OWC playoff semi-final.  A Spike! magazine rating of 187 signals that they will be able to put up a good fight on the day.

It has been a wonderful 2nd half to the season for the Bloodjaws.  8 games unbeaten and the Sly Sports Vase in hand already.  The Bloodjaws are the form team in the Old World Conference with 22 TDs and 38 casualties caused in 13 games.  They are led by the quartet of blitzers who have scored 21 of the 22 TDs and 23 casualties.  It is an amazing return from 4 players.  Only 11 players but with a huge bank balance they have a Spike! magazine rating of 271!  They really are the team to beat in the OWC.

This match seems to be all about 2 players.  Ludual Sharpfoot vs Korgak the Krazy.  Each seems to be the go-to player for their respective teams and has done damage against the opposition.  Here though it is hard to ignore the Orc powerhouse of Korgak the Krazy; 10 TDs and 9 Cas.  That is a good return for any player and him with his other match hardened players look to be favourites here.  The Assasins have not focussed on one or two players in the team preferring a policy of spreading the TDs, casualties and completions between no less than 9 players.  This  has ensured that all the players in the team are adept at what they do and can be a match for anyone but will require good solid and sometimes risky tactics to beat this Orc team.

I think the Bloodjaws will do exactly what they have aimed to do every game and that is cause pain!  They are built to injure other teams with 4 black orcs and 4 blitzers who are trained to hit and this is their primary weapon.  Saying that with a practiced thrower and two blitzers who have learnt how to ball handle as well as any elf they also have a passing option to their game.  Don’t look to far from the match all starting with the pain being brought to the Dark Elf front line (1) before Vrograg Spleen Chucker fetches the ball (2) and the blitzers/linemen form the shield for the ball carrier (3).  This will give the team the most attacking options with the handoff possibility to both blitzers for them to run into a strong position. 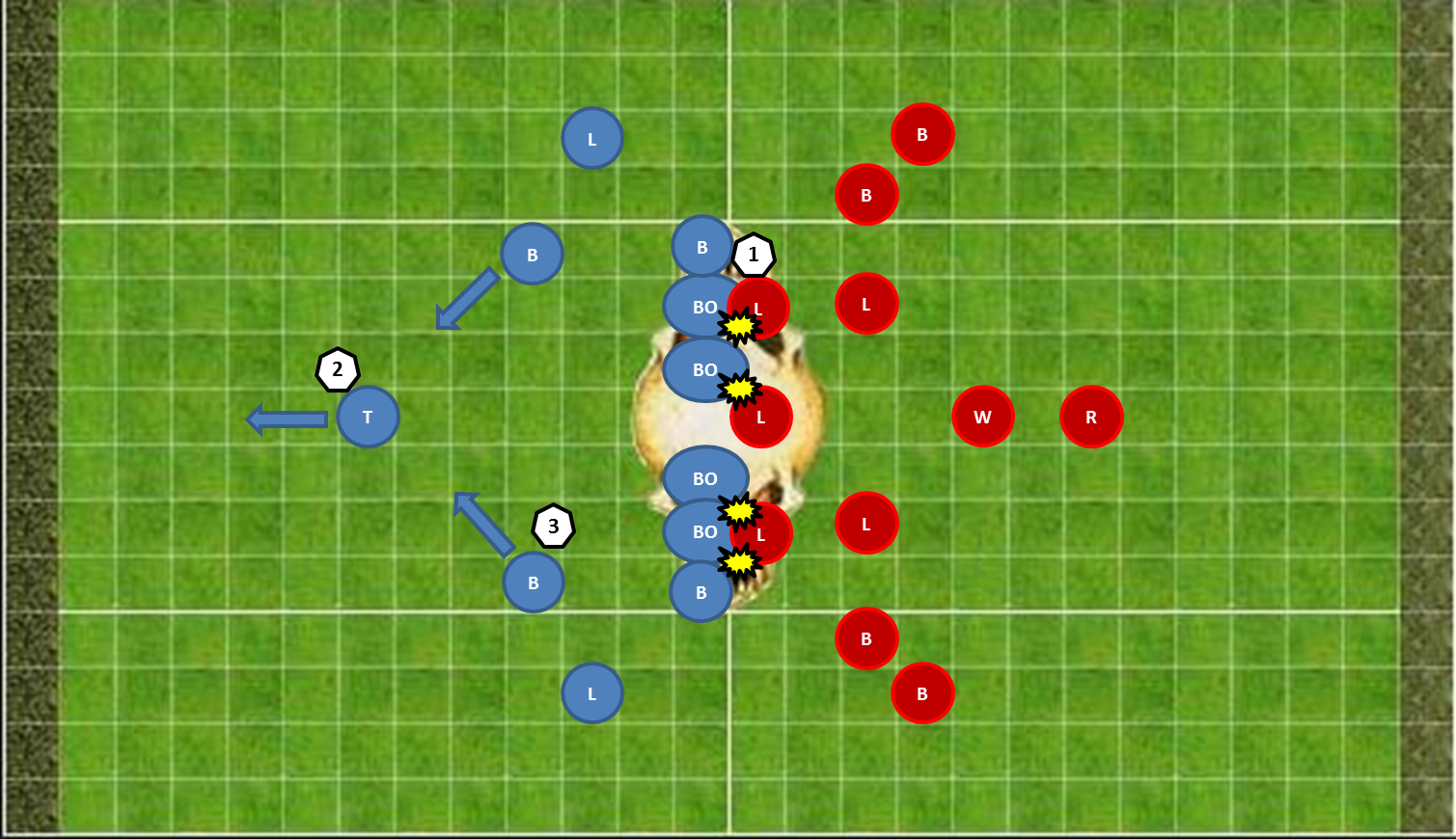 Defensively the Dark elves will have two options which are all ways there (1) stand off and force the orcs to go around or through you.  This will slow them up and if you can reduce the blocking that they can do the elves will have a chance to prevent the score.  The alternative is (2) Rush the thrower.  If the kick is deep or close to the side line LOS an option is to prevent the thrower/blitzers getting the ball.  Get players around the ball force a mistake and then get the ball.  It could be risky as the elves could get hurt but it could pay dividends.

Dark Elf offence should be varied.  As elves they can do anything with the ball.  A hand off, a quick/short pass and this team can be so far away the Orcs couldn’t be able to catch them.  It is my thoughts that the elves should try and drag the Orcs around.  Firstly the Assasins should move to get assists and create a potential screen (1) the Orcs are then blitzed to one side (2) creating an open side line then with the Witch elf keep that area open for the runner to move down (3).  However, with the runner an expert in getting rid of the ball when under threat you could see the ball transferred to the other side of the pitch if the Orcs over commit to preventing the score which would take the Bloodjaws out of the match and kill some of the clock. 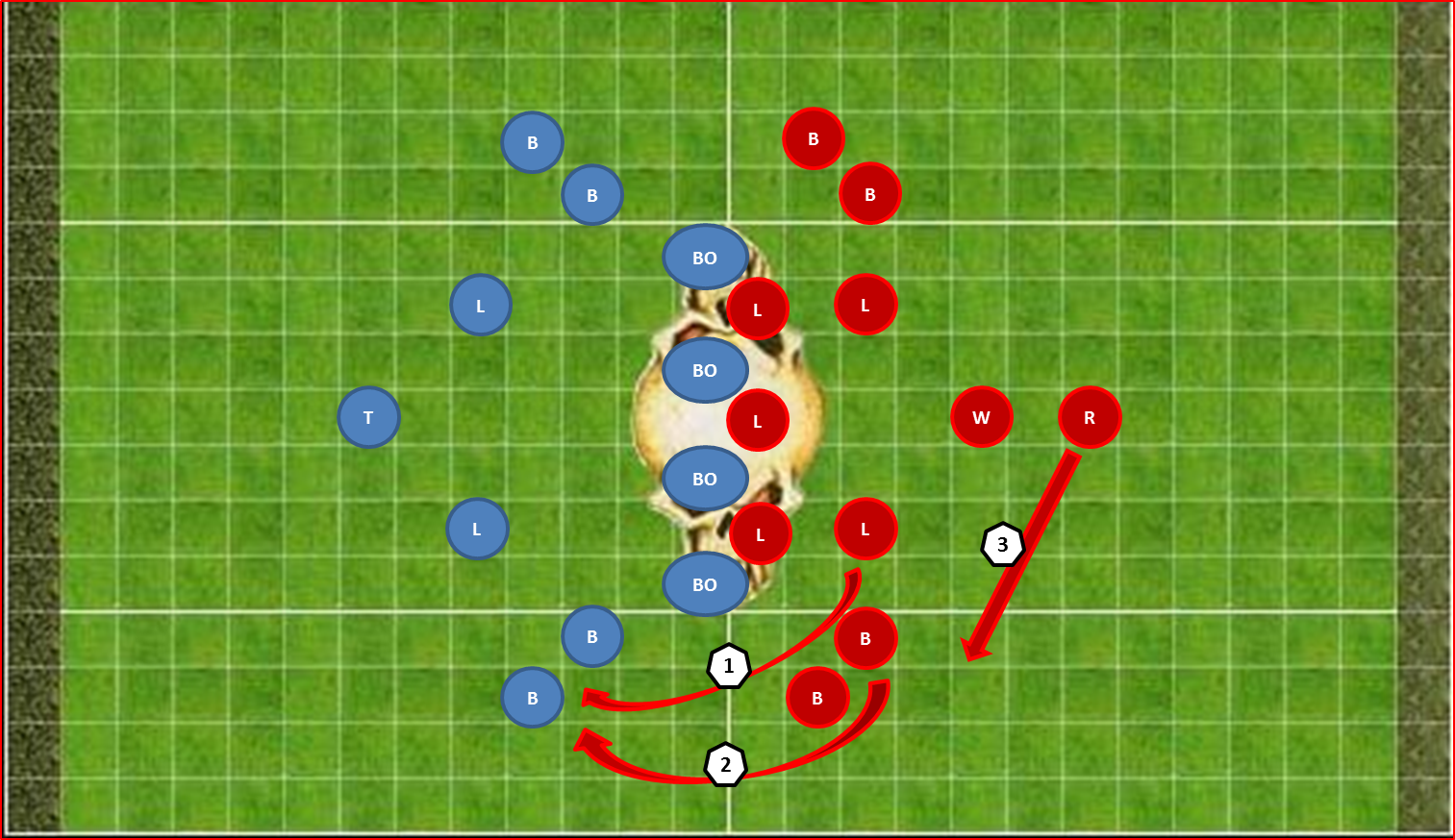 Bloodjaws defense is about pain and prevent or about letting the Assasins score.  If they push the Dark Elves around enough they may be able to get a hit at the Assasins runner but with the player talented at getting rid of the ball it could all come to nothing.  They will have to not overcommit or the Bloodjaws could find themselves out thought and in a bad position with the clock running down. Because of this it could be a tactic to let the Assasins score and get the ball back in hand to beat them again.

I would like to say this one will be close.  Unfortunately I can’t.  I can only see one winner here and it is the Bloodjaws.  They are strong, versatile and are on a wonderful run of form.  Will it be a close score line? Yes it will be 1-0, 2-1 or 2-0 but everyone saw how they destroyed the Temper Bay Marauders and it could happen again.  This leads us to the other question – Can the Darkfleet Assasins win? my opinion is Yes.  Without doubt.  They have the elements within the team to move that ball and get the TDs which could make the Bloodjaws panic and force mistakes.  Give the Assasins a bit of the rub of the green and it could be their day.  I just think it won’t be.  The safe gold is on the Bloodjaws to go to the Superbowl this time out.  Good luck to both teams.