Hello Sports Fans and Coaches of the HDWSBBL,

Are you ready for the Superbowl!  In the Crown Jewel match of the HDWSBBL the Arkhan Black Towers play the Black Mountain Bloodjaws in a winner takes all chance to get their hands on the most coveted trophy.  It is the first time these two wonderful rookie teams have met in a match which could be the closest and most entertaining of the entire season!  Let’s look at the teams and how they made it to the HDWSBBL Superbowl Final.

What a rookie season the Towers have had.  11 wins, 1 draw and only 1 loss on their way to the New World Conference Play-Offs 2514/15 championship and the The Sly Sports Challenge Cup 2514/15.  Along the way they have beaten the much fancied Ashut Titans, the brilliantly rebuilt and coached Oxmoor Savages (three times), and the OWC finalists of the Darkfleet Assasins.  Scoring 25 touchdowns and causing 31 casualties in 13 games the Towers have excelled in taking the weaknesses of their opponents and using it to their advantage.  13 men on the roster with emerging stars coming from their Mummies and Ghouls “The Doc” has guided them well and has again made it to the Superbowl for a 3rd time in 4 seasons.  However, “The Doc” has always lost to the eventual Superbowl winner.  Will it be 3rd time lucky?  With a Spike! Magazine rating of 257 it could be destiny that he lifts the trophy this time.

There are only so many superlatives you can have about the Bloodjaws 2nd half to the season.  It all started after they beat the Darkfleet Assasins on their way to lifting, the challenge cups little brother, The Sly Sports Vase Championship 2514/15.  Since then they haven’t looked back: 8 wins and 1 draw in a season where they have won 9 from 14, drawn 4 and lost only 1 to the Oxmoor Savages.  Now they have added the Old World Conference Play-Offs 2514/15 to the trophy cabinet after beating Darkfleet Assasins in the OWC final and the veteran (and favourites for the OWC championship) Temper Bay Marauders 4-0(!) in the semi-final.  They are led by the quartet of blitzers who take care of business every time they hit the field and supported by 4 hulking black orcs.  Only 11 players who have also scored 25 touchdowns and 42 casualties and with a huge bank balance they have a Spike! magazine rating of 304.  Watch out they could cause this to be a slobberknocker!

There is a bit of a gap here in SPP and team development and this can all be traced back to the conferences that each team played in.  Whilst the Towers had the Ashut Titans, Oxmoor Savages and Monster Mashers the Bloodjaws had 2 types of elf and the norse of the Valhallen Vixen’s.  The casualties racked up and the Orcs got better at what they do best – hitting things.   However, if you look at the teams make up they are more equal with most players having two bits of added training to their arsenal.  Looking at the top player stats you can see that it is remarkably close.  Where the teams do differ are the team styles.  No passes from the undead and a handy 9 completions from Vrograg Spleen Chucker shows the Orcs are not afraid to mix it up.  Could this be the thing that tips the balance? Well it worked against the Assasins.

The Arkhan Black Towers will be looking to keep it as fluid and as versatile as possible.  This is what they excel in.  Finding a way to get through no matter how it happens.  Can they hit? Yes two mummies can hit as hard as anyone in the game and alongside the super strong zombie in the front line have gone toe-to-toe with Chaos and Chaos Dwarves and come out victorious.  Can they ball handle? Yes.  Just look at those TD figures.  So how will they play?  On offence watch for the pain to be rained down from the front line (1) as the mummies hit the Black Orcs/Linemen.  The ghouls will play the ball (2) and move it to safety waiting for a gap before running it through to the Endzone (3).  Orc defence will rely on remaining standing and hitting back pushing the undead away.  If they can injure a few players along the way that could be very useful to tie down the faster Towers players. 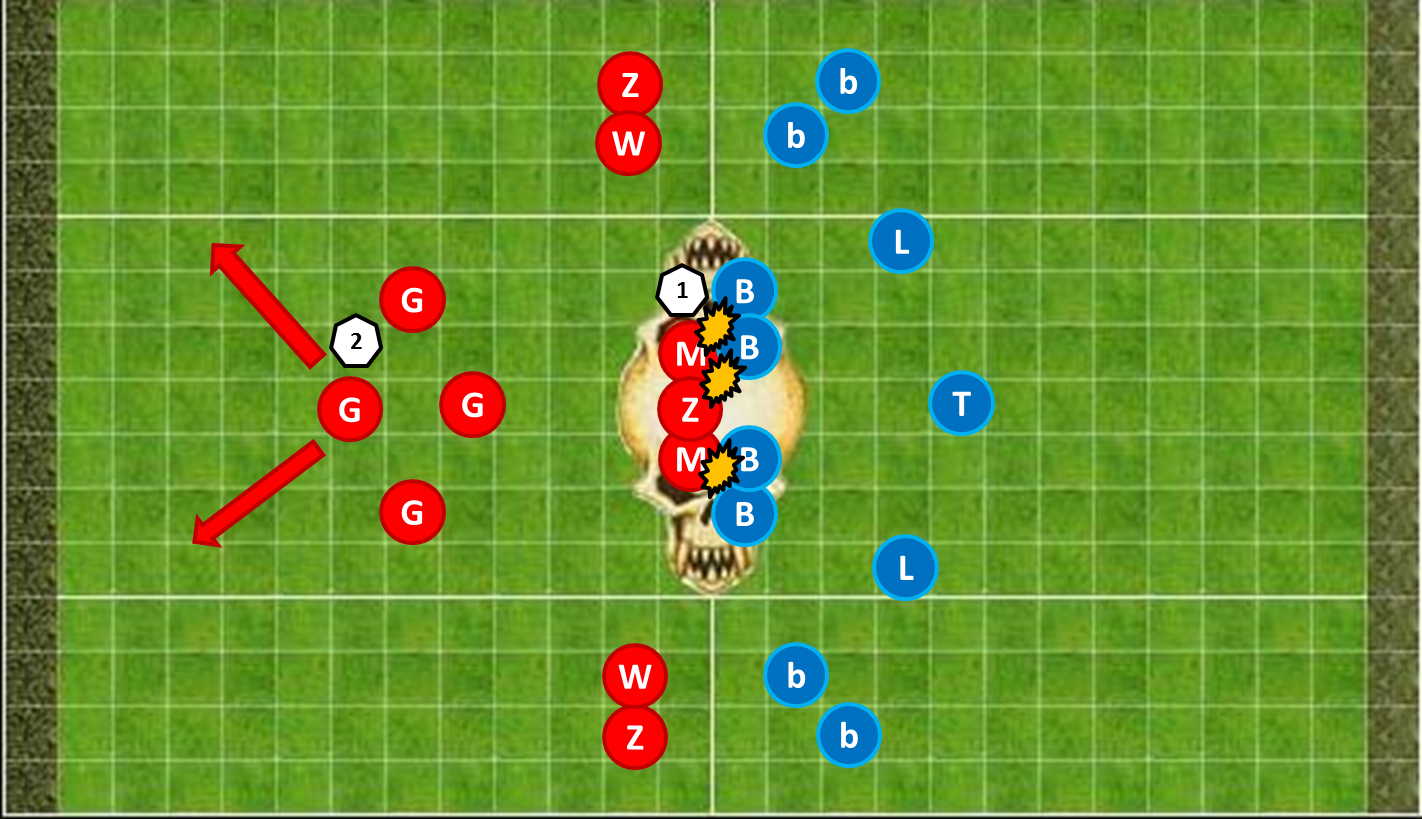 Orc offense will be about pain and grinding with the added advantage of being able to have the passing option.  A quick touchdown is not out of the question if you have a pass and then a handoff just to dash to the endzone.  The Black Orcs and Blitzers will line up to hit the front line (1) whilst Vrograg Spleen Chucker gets the ball (2).  Now comes the choice – form “Da Cage” or look to pass and it will be dictated by the amount of time is on the clock.  A full half to score and the Boyz will roll down the field.  Only less than a quarter left and it will be passing time.  What and option to have! 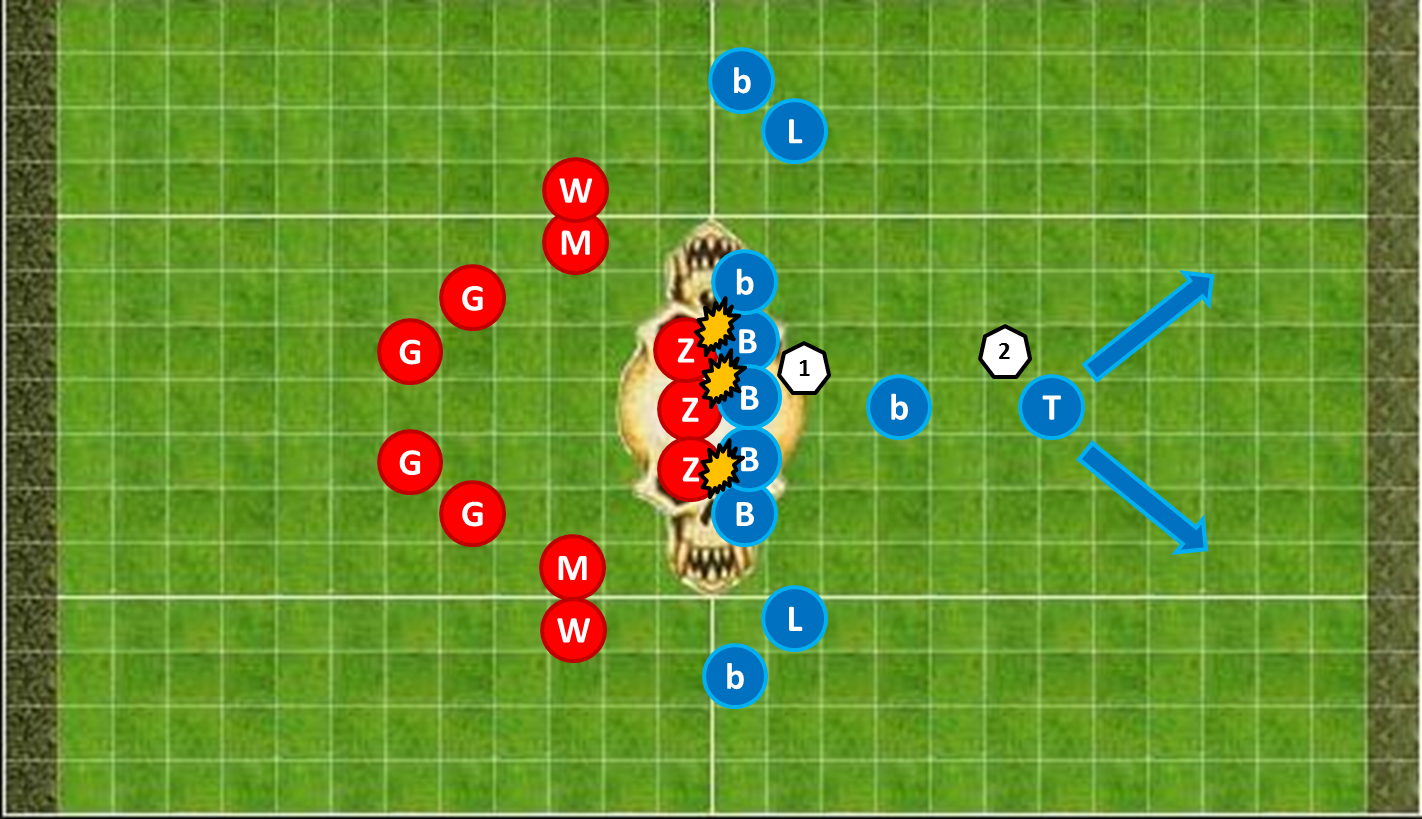 A prediction?  Well I can’t give one for score.  Being one of the coaches in this Superbowl match I don’t want to say it will be one thing or another.  What I can say as it will be close.  Orcs vs Undead normally is and it will take at least 2 touchdowns from one team to win this one.  Casualties could be critical and the Orcs are built to hurt but if the Towers can get a couple off the pitch that will change the picture all together.  One’s thing for certain whoever wins this one will certainly deserve the title.